USS Hatteras (formerly St. Mary) was a 1,126-ton steamer purchased by the Union Navy during the early part of the American Civil War. She now rests in approximately 60 feet of water some 20 miles off Galveston, Texas. 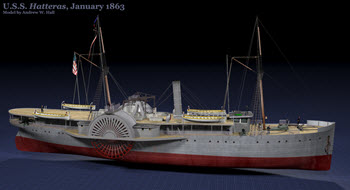 She was a gunboat assigned to the Union blockade of the ports and waterways of the Confederate States of America, and she was sunk during an engagement with the disguised Confederate commerce raider CSS Alabama.

USS Hatteras’s hull is buried under about 3 feet of sand, with the steam engine and two iron paddle wheels remaining on the ocean bottom. The wreck site is one of few listed on the National Register of Historic Places. USS Hatteras is considered especially important since the is an example of the transition between wooden sailing ships and steam-powered ships.

USS Hatteras is the property of the United States Navy. Local treasure hunters once filed suit claiming their right to salvage the wreck, but they didn’t win their case. The wreck site is now maintained jointly by the Texas Historical Commission, Texas A&M University at Galveston and the Federal Bureau of Ocean Energy Management.

USS Hatteras in the Union Navy

Hatteras (formerly St. Mary) was purchased by the Union Navy from Harlan and Hollingsworth of Wilmington, Delaware on September 25, 1861.

After being purchased by the navy, Hatteras was brought to the Philadelphia Navy Yard to be fitted out.

She was commissioned in October 1861, with Commander George F. Emmons in command.

In November 1861, the USS Hatteras sailed for Key West, Florida to join the South Atlantic Blockading Squadron. After arriving in eight days later, she participated in the blockade off Apalachicola before being reassigned to Cedar Key.

In mid-January 1862, Hatteras successfully raided the Cedar Key harbor, destroying many vessels and buildings, and capturing 14 of the 22 men stationed at the garrison. Afterwards, Hatteras was transferred to the Gulf Blockading Squadron and arrived to its destination in the waters off Louisiana towards late January.

Within a year, Hatteras had captured seven blockade runners in the Gulf of Mexico; taking the ships and depriving them of the cotton, sugar and other goods that the Confederate south was desperately trying to export to generate funds. One of the captured ships, a 20 long tons sloop named Poody, was renamed Hatteras Jr in honor of the USS Hatteras and became a part of the Union’s Gulf Blockading Squadron.

USS Hatteras is sunk by the CSS Alabama

When USS Hatteras was ordered to join the blockading squadron under Rear Admiral David Farragut, it was the beginning of the end for her. At the time, Farragut was trying to take back the port of Galveston from the Confederate forces, since it was a key Texas port of great strategic importance.

USS Hatteras joined Farragut’s squadron on January 6, 1863. Her skipper was Commander Homer C. Blake, since her old skipper Commander Emmons had been relieved in November the previous year.

In the afternoon of January 11, 1863, USS Hatteras was ordered to give chase as a set of sails had been spotted just above the horizon. USS Hatteras commenced the pursuit around 3 pm and kept it for several hours, while the unknown square-rigged ship gradually moved closer and closer to shore.

As dusk was falling, the USS Hatteras was finally within hailing distance of the other ship, which was flying the Union Jack. Commander Blake demanded her identity, and was answered that it was “Her Britannic Majaesty’s Ship Petrel”. Blake was distrustful, and ordered one of Hatteras boats to inspect this supposedly British vessel. Once the longboat started to pull away from the USS Hatteras, Commander Blake got a new reply from the square-rigged ship: “We are the CSS Alabama.”

Now, the Union Jack was lowered and the Confederate Stars and Bars raised in its place. The ship pursued by the USS Hatteras turned out to be a Confederate raider led by renowned Commander Raphael Semmesstruck.

After revealing its true identity, the CSS Alabama started raking the USS Hatteras with her heavy cannon, and Hatteras responded in kind. For roughly 20 minutes, the two ships exchanged heavy fire from a distance ranging from 25 to 200 yards.

The visibility was poor in the gloomy dusk, but the Union squadron located some 16 miles away could hear the cannons going off and see flashes from the guns. The cruiser Brooklyn was promptly dispatched to investigate the situation, and help out the Hatteras if needed.

Before Brooklyn could reach her, Hatteras was badly holed in two places and taking in large amounts of water. She began to sink, and Commander Blake ordered the magazines flooded to prevent explosion. Reluctantly, the commander fired a single bow gun to indicate surrender and a need for assistance.

Alabama responded to the surrender by sending over her boats to help rescue the Hatteras crew, including Commander Blake. It was a race against time, and the last boatload of men had barely left Hatteras when she finally sank.

The hole event, from the first cannon fired to the USS Hatteras disappearing into the blue, had taken place in roughly 45 minutes. Two members of the Hatteras crew had been killed and five wounded. On Alabama, two men were wounded but none of the lethally.

Six Union men from Hatteras escaped in the longboat sent out to investigate “the British ship”, and they made it back to the Union squadron unharmed.

When Brooklyn reached the wrecking site of Hatteras early in the morning, Hatteras’ hulk was sitting upright in the water roughly 20 miles south of Galveston Light. Only her masts could be seen above water. The U.S. Navy commissioning pennant was waving from her topmast, since her colours had not been struck as she surrendered.

The Hatteras crew onboard Alabama were taken to Port Royal on Jamaica by the Confederates, whence they were paroled by to the United States.