The Lost San Saba Silver Mine

In 1756, a Mexican official reported that Native Americans had told him about an exposed strain of pure silver as he was traveling through Texas. According to his report, the silver was located in a hill in Central Texas. 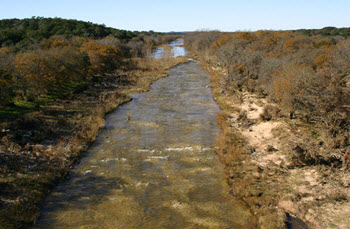 In the 1820s, American empresario Stephen F. Austin made his first trip to Texas where he was told about the presence of a rich silver mine near the San Saba River and a gold mine near the Llano River. Austin dispatched soldiers to search for the mines, but to no avail.

By the end of the 1820s, the legendary Lost Silver Mine of San Saba began to appear on maps depicting Texas – but different maps showed it at different locations. American pioneer James Bowie organized an expedition to find the mine, but ended up empty handed.

The Boyd shaft on Honey Creek has sometimes be suggested as the origin of the myth, but when this shaft was inspected by the U.S. Geological Survey in 1909 they described it as unproductive.

The Lost Silver Mine of San Saba continues to have its appeal for treasure hunters – maybe its still out there to be found?

About the San Saba River

The San Saba River is located on the northern boundary of the Edwards Plateau in Texas.

It starts out with two primary branches: the North Valley Prong which runs east through Schleicher Count for 37 miles and the Middle Valley Prong which runs through the same county for 35 miles. The two branches merge near Fort McKavett, and from this point the river is known as the San Saba River. The San Saba River flows east/northeast for 140 miles before reaching the Colorado River just east of the city San Saba.

The river’s Spanish name is Río de San Sabá de las Nueces, a name selected by Juan Antonio Bustillo y Ceballos, governor of Spanish Texas. In 1732, he and his troops reached the river on the feast day of Saint Sabbas the Sanctified, hence the name. In 1757, Santa Cruz de San Sabá Mission was established next to the river.

Today, large stretches of the San Saba River is dry due to over-appropriation. The pumping of aquifers hydrologically connected to the river is one of the reasons behind its bad current shape.