The buried loot of the Newton Gang

The Newton Gang was a notorious group of bank- and train robbers chiefly active in Texas and nearby Oklahoma. The core of the gang was the Newton brothers from Uvalde County, Texas. They started out with small-scale local thieving as children, before four out of five brothers eventually graduated to full scale adult outlaws.

Formation of the Newton Gang 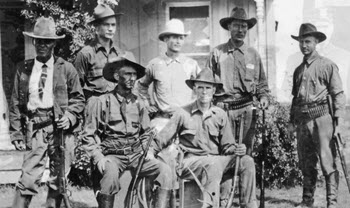 The first Newton brother to carry out a train robbery was Willis Newton, who together with a friend boarded a train at Cline, Texas and swiftly proceed to steal everything of value from its passengers. Willis and his friend disembarked the train close to Spofford in Kinney Conty, carry a booty of approximately $4,700.

Willis Newton eventually ended up in Durant, Oklahoma, where he joined a gang that carried out a bank robbery in Boswell. The yield was roughly $10,000.

By 1919, Willis Newton was serving time in prison for his crimes – but he wasn’t the only one. The long arm of the law had also caught up with his brothers Jess, Joe and Willie (nicknamed Doc). All four brothers were serving time in different prisons due to their crimes.

When Willis and Joe were released from prison later in 1919, Willis convinced Joe that they should team up and form their own gang. In 1920, Doc escaped from the prison in Texas and quickly partnered up with his two brothers in Tulsa, Oklahoma. Jess was released the following spring, and the Newton gang got its fourth and final member.

The Newton Gang gets to work

The Newton Gang was a prudent group of criminals who preferred to hit banks only after spending several days watching and preparing. They used nitroglycerin to blow open safes, before grabbing the cash and disappearing into the night. They worked quickly and efficiently – one night they even managed to pull off not just one but two bank heists in Hondo, Texas before sunrise.

Between 1919 and 1924, the Newton Gang robbed 87 banks and six trains – taking more loot than Butch Cassidy, the Dalton Boys and the James Gang combined. The Newton’s didn’t limit themselves much geographically – they even ventured into Canada in their search for cash. Texas, Oklahoma, Kansas, Nebraska, Iowa, North Dakota, Wisconsin, and Illinois are all examples of U.S. states that got one or more very unwanted visits from the Newton brothers. Throughout these years, the legal authorities didn’t connect the dots and no one except the Newton’s themselves knew that they were responsible for all these robberies.

One of the reasons why the gang managed to avoid notoriety was of course that they preferred to work at night when the banks were closed and empty, rather than attacking open banks filled with staff and patrons. On the few occasions were they did carry out day robberies, they were reportedly very calm and polite – going out of their way to ensure that the robbed people in the bank or on the train didn’t get too upset. Astonishingly, the Newton Gang never shot anyone during any of their robberies – at least not if we don’t count the stray bullet that went into Doc Newtons leg.

The largest train robbery of them all 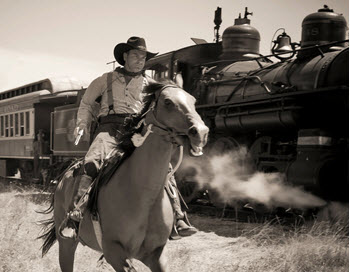 The Newton Gang’s largest heist also became their downfall. In June 1924, they joined up with with two Chicago gangsters, a Chicago racketeer, and a postal inspector named William J. Fahy, to rob a mail train in Illinois. The mastermind behind the plan was Fahy who had inside information.

On June 12, they boarded the mail train, and Fahay and Willis Newton forced it to stop at Rondout and throw out the mail sacks – which were filled with cash and securities. To enforce their demands, the gang fired bullets and threw tear gas into the mail car. In the confusion that ensued, one of the bullets hit Willie “Doc” Newton in the leg.

The gang loaded up both cash and the wounded brother in a waiting car and took off. While doing so however, one of them called the wounded man Willie and this was overheard by a bystander who passed the information on to the authorities.

The yield was amazing – over $3 millions. It was the largest train robbery in history. Naturally, this brought down the combined forces of several law enforcement agencies on the robbers, who now also had a wounded member to tend to.

The gang is caught

A few days after the robbery, someone told the legal authorities that there was a wounded man in a north side Chicago house. The police followed up on the tip, and within days had both Doc, Willis and Joe Newton under arrest.

Jess Newton wasn’t arrested since he managed to run away – taking approximately $35,000 with him. He left Chicago heading for Mexico, but made one fatal mistake; instead of staying sober and going straight to the border, he decided that he wanted to get drunk in San Antonio, Texas. To avoid losing his booty while drunk, he decided to bury it. He hired a cab who brought him out into the countryside where he buried the money in the ground. He then swiftly returned to San Antonio and carried on with this plan to get hammered.

Jess Newton kept on searching for a while, but then gave up and decided he needed to get to Mexico before the law caught up with him in the U.S. He did manage to get to Mexico, but a federal agent found him in Via Acuna and brought him back across the border.

All eight men of the train heist where arrested and sentenced to prison, with Fahy receiving the longest sentence; 25 years in Federal Penitentiary at Leavenworth, Kansas.

The Newton brothers got shorter sentences, and when they were released they returned to their home town Uvalde.

In 1968, an old Doc Newton – he was then in his mid-70s – was apprehended while trying to break into a bank in Rowena, Texas. Because of his age, the authorities simply turned him lose again.

In 1975, Willis Newton was implicated in a bank robbery in Bracketville, Texas, but here wasn’t enough evidence to convict him.

Where is the money now?

When brought to justice, the eight men that had participated in the country’s largest train heist returned what they had left of their stolen loot in exchange for more lenient sentencing. Thus, almost all of the cash and securities were brought back – except for roughly $100,000.

This includes the $35,000 buried by Jesse outside San Antonio. The Newton brothers of course went looking for it after getting out of prison, but never found it.

According to information from Willis, Jess remembered digging a hole for the money on top of a hill and placing a big rock over the treasure. In court, Jess had testified that he hid the money along the Fredericks Burg Road, but Willis was convinced that the hiding spot was actually closer to the Bandera Road.

I recommend that you build a low to medium risk portfolio filled with blue chip and dividend stocks. Put 90% of all the money you can afford to save each month into this account.

Use the remaining 10% for more lucrative and high risk trading such as binary options or CFD trading. You can learn more about this type of trading.