The wrecks of Espíritu Santo, Santa María and San Esteban 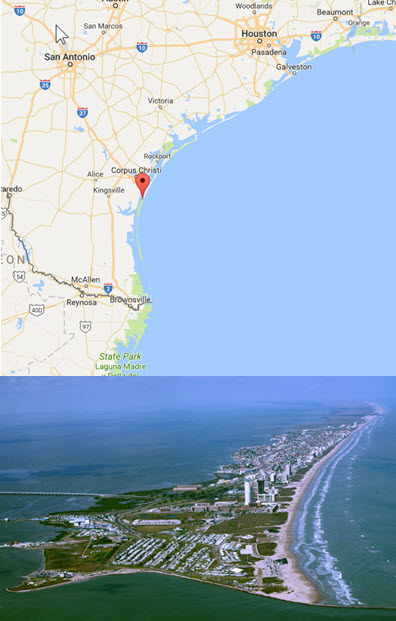 Over the last four centuries, dozens of ships have sunk off Padre Island; the largest of the Texas barrier islands an the world’s longest barrier island. Located along the southern coast of Texas, Padre Island was named after its 19th century owner Father José Nicolás Ballí who served as a missionary priest and collector of finances for all the catholic churches in the Rio Grande Valley.

On April 9, 1554, a treasure fleet consisting of the ships San Andrés, Santa Maria de Yciar, San Esteban, and Espíritu Santo left Veracruz together as a flotilla. Among other things, the ships were transporting circa 91,000 pounds of precious metals belonging to the King of Spain.

On April 19, 1554, Santa Maria de Yciar, San Esteban and Espíritu Santo were wrecked off Padre Islands after encountering a sudden storm. Only San Andrés made it through the storm, and eventually entered the harbor of Havana, Cuba with its share of the valuable cargo.

The three ships left Sanlúcar de Barrameda, Spain, on November 4, 1552. They were a part of a 54 ship strong fleet that included six well-armed ships. The six armed ships and 18 other ships were heading for the South American mainland, while 16 ships were destined for San Juan de Ulúa in New Spain (now Mexico) in North America. Ten ships were going to Santo Domingo and four to other parts of the Caribbean.

Eight ships were lost along the way due to bad weather and pirates, but all the 16 ships destined for New Spain arrived safely at Vera Cruz in 1553. The previous fall, Vera Cruz’s harbor had been badly damaged by a hurricane, and it hadn’t recovered yet when the 16 ships arrived. Because of this, the ships were unloaded and refitted more slowly than normal. When it was time for five of the ships to head for Cuba to meet up with the other ships returning to Spain that year, four of them weren’t ready yet.

San Esteban stayed behind in Vera Cruz, together with San Andrés, Espíritu Santo and Santa María. When the four were finally unloaded and refitted, they decided to sail for Havana on their own instead of waiting for an escort. Captain Antonio Corzo was named captain-general of the flotilla. The passenger lists included merchants, former soldiers, wealthy citizens, five missionaries and a few prisoners.

The four ships heads for Cuba

The four ships left Vera Cruz on April 9, 1554, carrying valuable treasure and cargo + over 400 people. The ships did, among other things, carry over 39,000 kg (85,000 lbs) of silver coins and disks minted in Mexico City; all placed inside barrels. The total cargo was valued at over 2 million pesos. 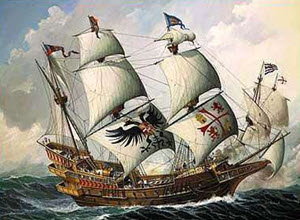 To get from Vera Cruz to Cuba, the four ships decided to take a route running along the shore of the North American mainland; along the parts that we today know as Texas and Louisiana. This was the preferred route due to the prevailing winds and currents.

On April 29, 1554, all four ships were getting close to Cuba when they were hit by a very potent storm. San Esteban, Espíritu Santo and Santa María were blown westward and wrecked on sandbars off the Padre Island. Only San Andrés managed to make it through the storm.

When Santa Maria de Yciar, San Esteban and Espíritu Sant sank, they brought 87,000 pounds of gold and silver with them. There was also about 300 people on board, and it is believed that more than half of them drowned and never reached Padre Island.

San Esteban’s master Francisco del Huerto managed to salvage a boat together with 30 other men. They made it all the way back to Vera Cruz where they alerted the Spanish authorities.

Of the people that did make it to dry land on Padre Island, some commenced a trek south along the beach in search of help and fresh water. Unfortunately for them, local inhabitants pursued them down the coastline and overtook them. According to an account written down by the Dominican friar Marcos de Mena – one of the passengers who made it to land – only two of these people survived: Marcos de Mena himself and a soldier named Francisco Vazquez.

Marcos de Mena managed to find his way to the mission village of Tampico, nearly 500 miles farther south, and the account of the event was published after his death. The reason for his escape was the fact that he had been so badly wounded by arrows that the locals just left him, probably because they assumed that he would be dead soon. Francisco Vazquez made his way back to the beach near the wrecking site and hid among the dunes until he was discovered and rescued by a Spanish recovery ship.

Investing in the UK
Do you want to learn how to make more money on the stock and currency markets? If so I recommend that you visit the website investing.co.uk. There you can learn how to use advanced techniques such as Leveraged CFD trading to make money in any market conditions. You can make money in bear and bull markets using CFDs.

Due to the precious cargo carried by Santa Maria de Yciar, San Esteban and Espíritu Santo, a Spanish salvage crew was dispatched to the wrecking site as soon as news of the event reached Veracruz. From July 1554, six other salvage vessels were there as well, staying for a total of three months. Records from the salvage effort show that approximately 35,000 pounds of the Spanish king’s treasure was recovered.

In the 1960s, renewed interest in the wrecks prompted the launch of new salvage efforts. Since then, several other salvage operations have been carried out, many of them providing historians with valuable information about 16th-century life on Spanish treasure ships. Salvagers and marine archaeologists have so far managed to recover thousands of artifacts, including cannons, glass bottles, navigation instruments and personal belongings. Gold ingots and silver disks have also been recovered.

If you want to see artifacts from the wrecks, you can pay a visit to the Corpus Christi Museum of Science and History. This museum also showcase artifacts from La Belle, a French ship that sunk in Matagorda Bay in 1686. Another great option is Port Isabel’s Treasures of the Gulf Museum, located a few blocks from Port Isabel’s downtown historic district. This museum is especially focused on San Esteban, and will for instance showcase a cannon ball, a swivel gun, a hull spike, some silver coins, and a silver plancha recovered from San Esteban. A silver plancha is a round silver ingot.

Santa Maria de Yciar, San Esteban and Espíritu Sant sank just off the coast near the present-day Mansfield Cut, a channel originally dredged through Padre Island in the 1950s.

Mansfield Cut can be accessed by boat or by driving. If you are on South Padre Island, use Beach Access Road No. 6. A high-clearance, four-wheel-drive vehicle is recommended, and the 28-mile trek should only be attempted at low tide. Sections of the route are underwater during high tide.